hello followers or future followers, i have been under the weather for a few days, not to mention that i still have to pack my life away to move out of town by saturday.  so... to ease my mind, here's what i thought about the new season of rupaul's drag race, mondays at 10 on logo or tuesdays at 9 on vh1.

it's back (finally?), and after an hour and a half of watching i still don't know half of these lady-boys.  i knew going in that there were 2 fatties and 1 ultra fatty competing, as well as someone from dayton, ohio (near me!) and raja/sutan, who was a makeup artist for america's next top model in some of the middle cycles.  there's an asian taller than 5 foot named manilla, a couple of dudes who look the same, two puerto ricans, a black one, and a contestant that was on last season and was eliminated first.  also someone who is always naked (which is a feat for someone who has to duct tape his junk to his abc.  is that all 13?  sure, why not. 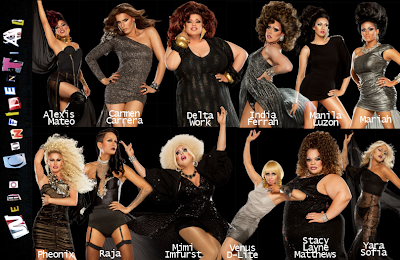 so...none of these girls are as beautiful as some of the girls from the past seasons.  by beautiful i mean they resemble a hot girl to a t (and a).  the only ones i like so far are the asian (manilla) and raja, the crazy crossover from top model.  raja won both competitions in the show (a photoshoot and runway/costume challenge), and rightfully so considering he has worked with tyra banks most of his life.  i doubt any of that will come up in the show, but what might come up is that the character raja is more of a transvestite rather than a drag queen, and that will probably hurt the chances of him winning.  he's definitely the most entertaining, though.  i'll end by saying that i loved it when rupaul said 'erica baduuuu' in response to one of the girl's costumes, and that i thought stacy lane, the ultra fatty in the worst outfit of the night, should have gone home.  doubt anyone will be able to relate to watching this show anyway, so!  i'll just leave it open for discussion.
Posted by jonwinters at 3:30 PM

Takes all sorts to make a world... drag artists can be hilarious

I'm sure they're nice boys.

Some of em are "Man the harpoons" material.

kill it with acid rain!

Will neg them in real life.

X.x the Ultra fatty scares me, I can't unsee what has been seen. ~Master Maniacal

i just got over a bad sickness myself. felt like a butt hole for a 2 weeks man.

haven't heard anything of this show before, it's so different that i think it might actually be entertaining to watch.

never heard of this show, but always open to new things!

this show is completely gay, but it's not like that makes it unfunny. i think more people should know about the lifestyles portrayed on the show, especially since it's really entertaining. and sparkly!

Hope you're feeling better, my roommate recently gave me and some 5 or 6 other people his cold.

Mega fatty will win... but they have all lost the respect of their friends and families...

I only recently found out who RuPaul is. The concept of this show is somewhat ridiculous! I like ridiculous things, but I'm neutral about this. I'm glad of its existence, but I wouldn't watch it... following.

Hmm I guess I will give this show a try, thanks for recommending it.

a lot of drag queens do it for entertaining purposes, to fulfill an image they want to portray as campy, sexy, entertaining... even rupaul said that he started doing drag to 'work an angle,' meaning it's nothing more to him than being a glamorous actor (singer, etc). that's where the phrase 'work it' comes from.

so just because they do this as a fun profession doesn't mean that they've lost respect from the people in their lives.

my day in a sentence said...

I'm sure I'd tap one of them XD

How many of them are actually homosexuals?