thank you, mother nature. your gigantic ice storm prevented me from having to move twice in two days.

the story is that i have a friend whom i attended university with excitedly willing to kick out her ex-girlfriend in order to give me a room to live in at her apartment. it was the three of them living in the 2 bedroom place, with my friend and her girlfriend living in the same room for the first month before they split up. three months went by, and when i went to visit her at the apartment in november for my monthly rounds we started to discuss my moving in to replace her ex-girlfriend. it was great, i thought. she wouldn't be emotionally distraught by seeing her everyday and would move into the living room, which is bigger than the bedroom and has a balcony, and i would be able to move in and she and her current roommate wouldn't have to have a $200 increase in rent every month.

the plans were set by the beginning of january, and i would be moving in on the first of february. since her exgirlfriend didn't move out because of the ice storm, i decided that the first was not the best day to move in my stuff as i would have had limited space to put it. i decided it was fine, even though i had spent plenty of time packing and fantasizing about how the whole move would take place (i'm rather obsessive in a way where i have to follow through with plans, else something in my head will snap and i'll end up rather disappointed). the plan was to just deduct money from a deposit i was giving the girl moving out for each day she still lived there. i couldn't move on the second either because the ice storm only got worse, and that was fine as i had means of compensating myself for the days i didn't live there.

all day today my phone was off, so when i got home around 10 i plugged it in to find that i had 5 messages from my friend, with a long apologetic wall of text that explained that (tl;dr) the landlord did not want to have 3 tenants at the apartment. i didn't rage. for some reason i was expecting this to not work out in my favor based on how undependable my friend has been in the 3 years i've known her. i mean, the reason why we were such good friends in the first place is because we are both rather selfish and destructive. the only difference was that i was emotionally selfish (kept to myself) and physically destructive, while she was physically selfish and both emotionally and physically destructive. our interests were completely different, but that didn't matter since we were so similar in our core values.

so now i do not know what the situation is down there; whether her ex-girlfriend actually moved out or not or if she decided that she inevitably did not want to share her already limited space with someone else. she could be telling the truth about the landlord, but she isn't above lying to save face. i doubt she's lying since she lost most of her friends after breaking up with her girlfriend and i helped her get over it emotionally. i was really looking forward to moving in with her and her kitten, 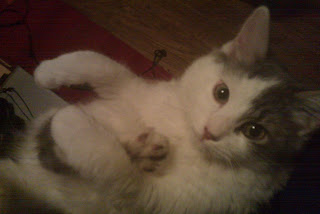 but i don't really have any intention on seeing her for a long time even if i move to the area by myself. between the times i actually helped her, the time i couldn't drive for 2 weeks after losing my car keys because she was just too busy to take me to the dealership for replacements, the going behind my back to tell our third roommate last year about how i spread her dog's fecal matter on her comforter and doorknob incognito after she wouldn't train the dog to not take a fucking dump twice (!) every day on the carpet (let alone that it was able to get into my room once, chew up my glasses and take a giant piss on my bed) after repeatedly telling her that it was disgusting and i did not want to live in such a shithouse, and for now being undependable after three months of getting my hopes up for the move.

i don't think anyone should have to deal with all of this drama from one person, so i'm just cutting her out of my life, fondly remembering her during the good times we had and wiping my hands clean. it's a pity, since she was my best friend my last two years of college and a significant part of why i moving to that area anyway.

so if her exgirlfriend had not stayed there yesterday because of the ice, i would have moved down then would have had to move back today or tomorrow per request of the landlord. you know, if she was being truthful. so thanks for the warning, mama n.

but hey, at least it's something to blog about!
Posted by jonwinters at 11:19 PM

SNOWDAY!!! woooo i havent put on pants all day!

Yea, best just to cut your losses, which really wasn't anything money wise just your hopes and stuff. If it's that bad before you move in imagine what it would be like while you lived there. #1 why I don't have roommates anymore can't stand the. At least you now have car keys :P

You are right, it's something to blog about! always nice to read your posts, take care.

It's hard living with a best friend sometimes anyway.

more bitches in the sea mate!

It would kill me, I hate moving.

I feel you. It's something to blog about. I'm tuned in.

its good to live over here in cali. forecast for the week: nice.

Snowday made my school close. :D

Youre right, atleast its something to blog about. Its a decent one too :P

Hah, my dad was talking about the blizzard.

I'm sayin what blizzard? It's like 60 here, pretty nice :p

I've had some bad experiences with friends turned room mates before as well. hope it turns out well :)

well at least you get to take a break because of the weather :)

sorry about your situation..but cute kiten!

also how did you get that background?

gosh, that's quite the drama laden situation. Come to think of it, my last move was as big a headache as well.

We had some light rain yesterday at very freezing temperatures, so it turned immediately into ice on the ground. I fell on my behind pretty hard when leaving McDonalds. It's a shame, if I'd live in the US I could probably sue them and be rich :'(

my day in a sentence said...

Mother nature can be a bitch sometimes.
Take care.

Sucks about all that extra rent man!

Sorry about the bad situation. :/ At least you have a cut cat though. xD

sorry to read this and take it as a good sign:)May be winter saved u staying with a horrible roommate.

I hate moving, really eel bad for those who do that for living.

How much rent is the kitten paying?

living with an ex is definitely the sucks.

That sounds pretty unfortunate. At least it sounds like you might be better off not living there anyway.

I lived with my Ex for a whole year, we got along ok, but it was hard not to think about sex...

Snow's a pain in the butt pal, we had a foot and half a few weeks ago, all gone now though, thank god

maybe it was some kind of fate which stops you turning down there...luck for you

and the very best for you and your friend

Yea this ice storm was a bitch. I hate winter... and ex girlfriends xD

drama drama - moving can be a pain sometimes

It sounds like you are having tough times! I hope everything gets sorted out!

Hey hope it works out for you soon! Follow me for some humor to make your day better!

haha the weather here is so bad i have to fuckin walk half a mile in the snow just to get a swisher. bull shit.

I suppose that's good and bad for both of you.

Hey, I wish you luck man, sometimes times can get tough

sorry to hear about your situation. sounds like you made the right choice and a very mature one at that, remembering the good times and cutting your losses was definitely the way to go!

Wow, this just sucks all around for you, yet it may end up working out for the best. Sometimes it is funny how life saves us.

Its a good thing I live in hawaii dont have to deal with those types of storms.

You were saved!
When you mentioned of wiping your hands clean, I couldnt help but think of the door knob incident :)

Like Brightview said, I hate snow it makes everything more complicated and slows it down.

I pity you mate! At least you got something to write about :)

love the blog, I wish the truth would com out more.

Truth. I live in the unplowed-bits of Brooklyn, snow is a nightmare. Never thought I'd be shoveling my way out of an apartment building.